FASHION, DISCRETIZED HUMAN AND ITS MODALITY #4 – Fashion, Religion, and Virus

The original text was written in Japanese and published in EKRITS.JP on October 20, 2016.  This post is translated from the 4th section of the original article.

“A couturier must be an architect for design, a sculptor for shape, a painter for color, a musician for harmony, and a philosopher for temperance.”

Within the century of his appearance, it is said that the manner of clothing based on the human body has ran out. Various styles were born, institutionalized as a uniform, and have been immobilized as the next new category, such as Punk, Trad, Work, Street, Avantgarde, and etc. 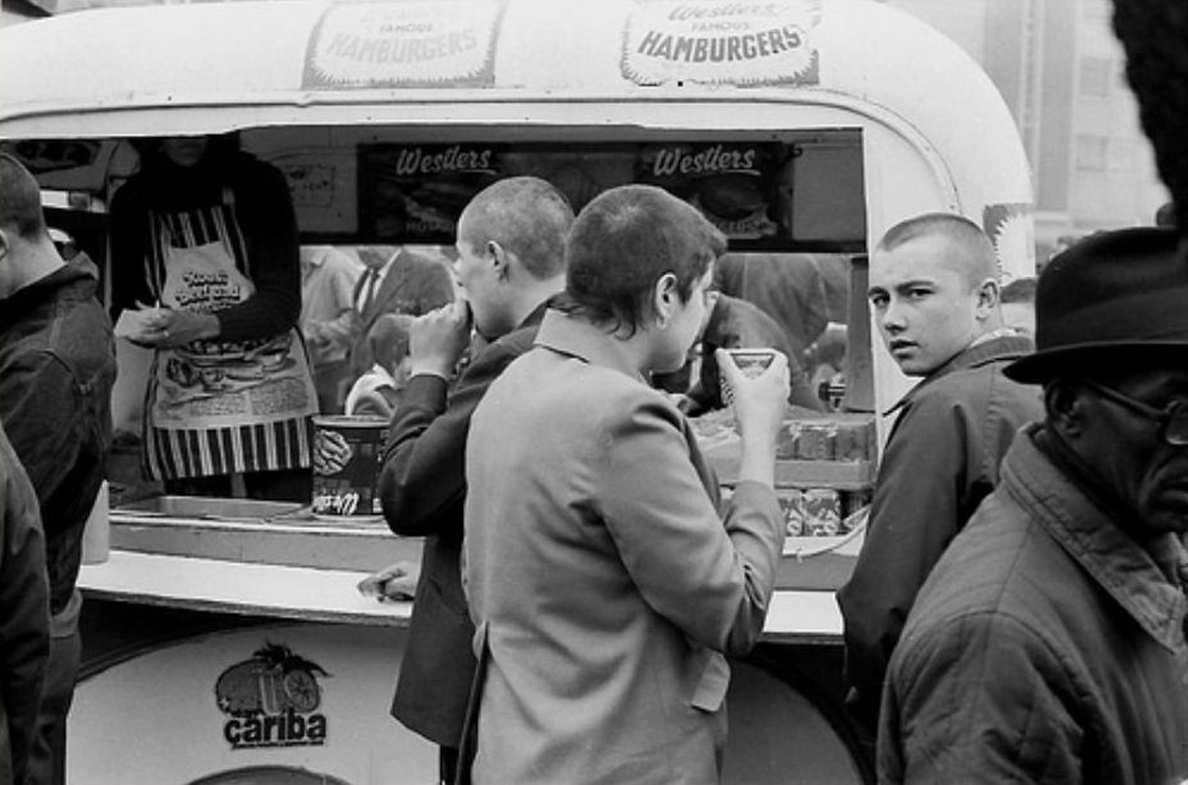 Photo of London in the 80’s. An educated computer program could easily profile the social class or attributes of these photo subjects. Likewise, we are unconsciously determining the attributes of the other.
“Skinheads in London City in 1981” (1981), via Wikimedia Commons

Most of today’s creation, except for a slight difference in the detail and texture, are inevitably retrieved in the existing categories. This circumstance can be seen explicitly in the way magazines and media, boutiques, department stores, online stores categorize merchandise.

To simplify this point of view, consider a plane coordinate system, where the immobilized existing categories are placed on the X-axis, and the merchandise and retail prices are placed on the Y-axis. The act of designing can be considered as creating an item that can be plotted on this plane, and to plot and land in an unknown realm is considered to be what we know as creating a new style.1)We could see the population per community by plotting z-axis on the plane. The plane could look like a map of bacteria cultured on a medium or some heat maps.

The turning point of fashion in a cultural context was marked whenever a new type of style was disseminated. The new fashion has hacked the unspoken codes and traditional values and obscured the boundaries of the community. And by evoking sympathy, fashion has changed the status quo. A new style turns into a uniform of these people who comes and goes along the blurred boundaries. The image of this style spreads amongst the people and affects the mind of the other along with the words associated with this image.

Tadao Umesao 2)Tadao Umesao / 梅貞忠夫 (1920 – 2010) : Cultural Anthropologist. His main work “Introduction to an ecological view of civilization” contains various suggestive topics that are also relevant to fashion., a Japanese cultural anthropologist, once advocated the virus theory of religion. But if we consider the viral aspect of fashion, we can see that fashion is a social phenomenon that has religious characteristics. In this sense, Judaism, Islam, Christians, Buddhism has always been influencing the human dynamics; this can be considered as the “designing in-distance” at the ultimate degree.

Let me propose a mathematical description to make this a bit more comprehensive. Suppose that the number of humans in a certain time frame as “\( N(t) \)”, and the number of systems or objects that exists in the same time frame as “\( M(t) \)”. When a human being “\(i\)” is in a specific condition, “\( C_i \)”, the interrelation of human condition \( C_i \), and the system and objects can be described as follows.

Accordingly, if we suppose the conditions of a system \( CM_1 \), to be a resulting factor or interrelations of human condition and systems existing in the world, it can be seen as follows.

in a dimension of \( N \times M \). Then we can see that when we as a human being “take action on“ towards the world, it can be represented as :

where \( (t’ > t) \). The \( O(t) \) here stands for an event that a human being or a system will be applying to the world of the future. When we extend the scope of “designing in-distance” to a distance near eternity, the main argument will be focused on how a newly created system “\( M_x \)” can affect the state of world \(A\).